If you’ve ever needed to blow your nose and asked for a Kleenex, wanted a cold bubbly beverage and asked for a Coke, or scraped your knee and put a Band-Aid on the wound, you’ve used a brand-name to identify a generic item. Similarly, Bauhaus architecture has become the catch-all term used to describe the architecture of Tel Aviv.

At the beginning of the 20th century, Walter Gropius a German Officer who served in the Great War (WWI) wanted to change the world. He thought that by designing small, but productive spaces for people he would solve economic problems and lack of dwelling in Germany. Thus, Bauhaus Collegewas founded in 1919 in Weimer, Germany. 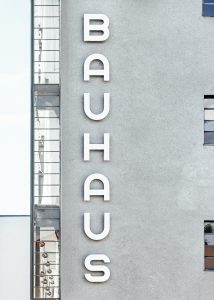 Bauhaus was an art school and architecture was one of the disciplines taught there. The architectural style of the 1930s was known as International Style (not Bauhaus style). The most important feature of this new architectural approach is that FORM FOLLOWS FUNCTION. Every element had to serve a purpose. 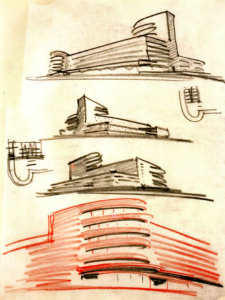 The school began to get a bit of a reputation and by 1924, Bauhaus students were considered to be quite notorious – loud Jazz music played on the campus (Jazz was illegal), women cut their hair short and wore trousers, and they spilled red paint on a statue! The school moved a few times and the founders were finally closed by the Nazi regime in 1932.

There were many Jewish architects who either learned in the Bauhaus school or were influenced heavily by the style. As the Nazi regime rose to power in Germany, these Jews fled the country to various parts of the world including England, the US, and British Mandate Palestine. Of these famous architects who came to Israel are Arieh Sharon, whose first commissioned work in Tel Aviv were four pavilions for the Levant Fair in 1932 which won first prize in an architectural competition and eventually paving the way to turn Tel Aviv into the “White City.”

Another key player – who actually was not from the Bauhaus school – who shaped the skyline of Tel Aviv was Erich Mendelsohn, a German-Jewish architect who incorporated local Arab elements such as domes and closed windows into his structures. The unique flowing shapes in his buildings give the feeling of movement

Due to Tel Aviv’s concentration of these International (Bauhaus) Style Buildings – more than 4,000 of them! – UNESCO proclaimed the City of Tel Aviv a World Heritage Site in 2003. You can see many of these bold, modern, white buildings throughout the city on our special Bauhaus Tour running during the 2019 Eurovision Song Contest! 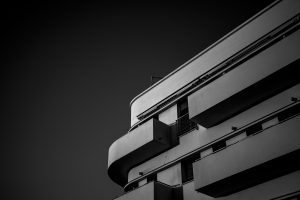 Things to do in Tel Aviv

So, you’ve arrived to the Holy Land - there’s so much history, arc ...

For many, Jerusalem is the center of the universe. It's the city where ...

Back to our blog
City Guides Travel Tips

So, you’ve arrived to the Holy Land - there’s so much history, archaeology, emotions - you’ve ...

How to Escape Prague's Crowds of Tourists

Prague - some call it The City of a Hundred Spires - has many amazing attractions for first-time or ...

I went on a walking tour today with my daughter and two teenagers through the Gothic Quartier of Barcelona.
Daniel our tour guide was amazing. His wide knowledge and funny way to pack in so much history and information was exceptional and outstanding.
We all had a great experience and got a really good impression of Barcelona including an update about the current protests.