So, you’ve arrived to the Holy Land – there’s so much history, archaeology, emotions – you’ve likely worked up quite an appetite! Here’s the guide to the top 10 Israeli Snacks you have to try!

There’s nowhere better in the world to grab a falafel sandwich than in the Middle East. Israel thought it would be a great idea to throw those little crispy balls of delight into a pita and make a sandwich. Everyone you ask has a different opinion about where to get the best falafel sandwich – if you ask me, it’s Tala Hummus and Falafel in Jerusalem’s Old City.

What exactly is a falafel? It’s really quite simple, actually, it’s ground chickpeas, onions, herbs, and spices, formed into a ball or nugget, and deep fried. Throw a few of those into a pita with some salad, hummus, and tahini, and you’ve got yourself a perfect snack! 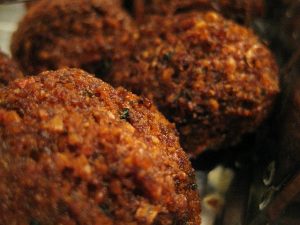 Don’t ask where the best hummus is because you’ll never get the same answer from two people. Hummus is highly contested in this region! But, it’s delicious most places you go. In the US and Europe, hummus is usually eaten as a snack with carrot sticks – In Israel, hummus is a way of life. If you want the authentic experience, you’ll mop up a plate of freshly made hummus with some pita bread, onion wedges, and pickles for breakfast! But there are many places around the Jerusalem that serve some great hummus well into the night. Some of the most famous hummus places in Jerusalem are Abu Shukri and Hummus Lina in the Old City, and Hummus Ben Sira just outside the Old City. Try them out for yourself! 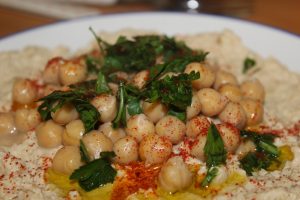 You’ve likely never heard of this before, but hear me out, it’s terrific. Sabich is a pita sandwich filled with deep-fried eggplants, hard boiled eggs, salad, boiled potato slices (or fries), and topped with tahini, spicy sauce, and a special mango sauce called amba. Aricha Sabich (next to Jerusalem’s famed Mahane Yehuda Market) serves up the best sabich in the city! 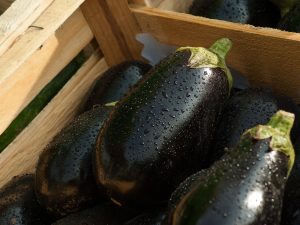 Maybe you’re craving some junk food – who doesn’t? Bamba is Israel’s favorite bagged snack. It’s a peanut puff – not crunchy, not soft, not sweet, and not salty. If you didn’t grow up with it, it might be a bit of an acquired taste, but trust me – it’s amazing! Because almost every Israeli grew up with these snacks – eating them from a very young age – peanut allergies are almost nonexistent in Israel! 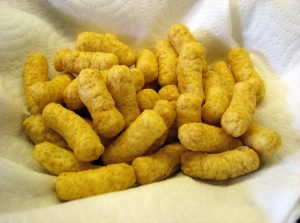 If you time your trip to Israel right, you might make it for the short window where this sweet treat makes an appearance. From the end of November through February, this snack pops up on market shelves around the country. It’s a small biscuit topped with a marshmallowy cream, covered in chocolate.

As far as Oriental sweets go, this one is the most unique – a layer of salty cheese topped with phyllo noodles, doused in sugar syrup and garnished with chopped pistachios. It sounds weird, but you have to try this before you leave Jerusalem. Served up with some strong Arabic coffee, it’s the perfect pick-me-up after a long day exploring Jerusalem’s Old City. The best k’nafe is found at Jaffar Sweets in the heart of the Muslim Market in the Old City. 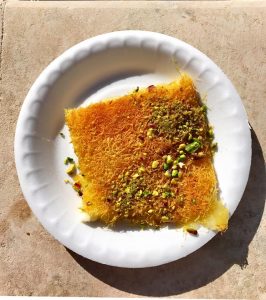 This one is another treat for your sweet tooth. Halva is unlike any other treat I have tried. It’s a candy made of ground sesame seeds and sugar – there are tons of flavors to try – vanilla, chocolate, coffee, and some as wild as caramel cookie, Oreo, and even whiskey! Our friends at Off The Wall make theirs in-house!

Maybe you’re feeling a bit more hungry and want a heartier snack – Shawarma is where it’s at! Thinly sliced chicken, lamb, beef, or turkey wrapped inside a large flatbread and filled with salads, hummus, and tahini. Wrap it to go, it’s a perfect hand-held snack to carry with you while you’re exploring! 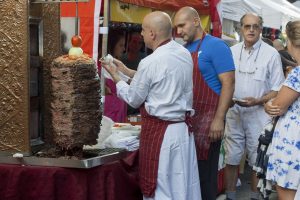 Israel’s culture has been influenced by those who come to it. Bourekas, which originate in the Balkans, have made their way to the Holy Land. Lots of layers of thin dough filled with cheese, or potatoes, or spinach, or pizza filling are a great snack to get you through your day. Many bakeries around the city will serve these up at all hours of the day! 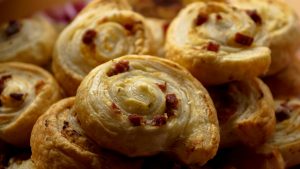 Again, timing is everything with this snack. Every year around Hanukkah, bakery shelves are loaded up with this doughnut-like pastry. The traditional sufganiyot are fried dough balls filled with a sweet strawberry jam filling and topped with some powdered sugar, but some fancy bakeries around the city make some amazing creations with fillings as wild as Boston Cream Pie, Oreo, dulce de leche, and more! 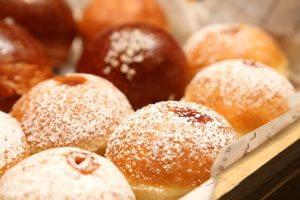 I hope that these few snacks have intrigued you to explore the cultural side of the city of Jerusalem, and at least keep you well-fed while you make your visit!

Christmas is upon us and what better way to impress your mates over a mulled wine than with some ser ...

There are a lot of New Year's traditions that are ubiquitous across the globe; fireworks (be they th ...