St Patrick was a 5th Century British Christian missionary and bishop in Ireland. Known as the ‘Apostle of Ireland’, he is the country’s patron saint. Legends told about St Patrick depict him banishing snakes from Ireland and converting his walking stick into a living tree, amongst many other great displays of divine power. However, there is one thing that is perhaps more legendary than St Patrick himself, more celebrated than his miraculous achievements, and certainly more revered worldwide; the day that is held in his honour.

Arguably, excluding Ireland, some of the best St Patrick’s Day Parties take place in the US; whether it’s Chicago’s green river, Savannah’s green fountains, or NYC‘s green everything. Nonetheless, we wish to remind our friends in the US that Dublin isn’t the only European city that can match their party-prowess, and here’s the list to prove it:

Have you heard the one about the Irishman in Copenhagen? No? Me neither. This is a strange one, as Denmark doesn’t typically have strong ties to Ireland. Nonetheless, Copenhagen’s celebrations indulge in the same activities that take place all over the world; parades, drinking green beer, and dancing to traditional Irish music.

Of course, Copenhagen’s most unique St Paddy’s Day tradition consists of a charitable three-legged race through the city’s Irish pubs, drinking in each one as you pass through. So, Copenhagen may not be the most obvious destination for St Patrick’s Day, but we sure like their style!

If Munich has any ties to St Patrick’s Day, then it’s a secret to us! What certainly isn’t a secret is the Bavarian love of beer and good times, making St Paddy’s Day a cause for celebration throughout the city. Since 1996, Munich has enjoyed an annual St Patrick’s Day parade, with the attendance growing stronger each year, as they take you on a ‘Journey to Ireland’ with traditional music and dance.

Whilst you’re getting caught up in the celebrations, don’t forget to join our Munich Beer Tour for a taste of the city’s own traditional brews!

With a cultural identity that proudly reflects Irish heritage, Glasgow has often been referred to as a second home for the Irish, and the city’s annual St Patrick’s Day festival seeks to celebrate the relationship between Scotland and the Emerald Isle. You can expect the usual festivities; the traditional music, the unique dancing, the typical drinks… if it sounds like it belongs at a St Paddy’s Parade – it’ll be there!

So, what makes Glasgow’s celebrations different? Well, quite simply – their authenticity and exuberant atmosphere. The pubs and bars organise and encourage live music performances and poetry readings, and with such a wild audience watching, you just know that ‘encourage’ is the right word!

SANDEMANs won’t be celebrating St Paddy’s Day in Glasgow this year, but take a short trip east to join us in Edinburgh for our St Patrick’s Day Pub Crawl, as we bring the Glaswegian atmosphere to Auld Reekie! 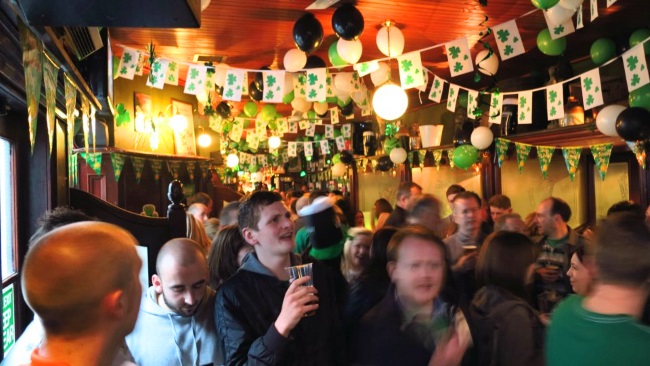 St Patrick’s Day may not be a public holiday in England, but with so many celebrations taking place throughout the world… do you really expect London to miss out on the fun?

Whether that fun involves indulging in the extravagance of the annual parade (1.5 miles long), experiencing top-notch music and comedy in Trafalgar Square, or simply throwing back a few pints of Guinness at one of the many Irish pubs, it’s safe to say that no one can be blue when surrounded by so much green.

Our surprise entry! The dark horse! The underdog… okay yeah, you all guessed this one… but you guessed it for a reason! Despite all the fantastic beer-swilling, shamrock-picking, rainbow-chasing, Leprechaun-hunting St Paddy’s Day celebrations, no one does it better than the Irish capital.

Whilst parties certainly are universal, what cannot be imitated is the country’s authentic display of national pride, as they honour their heritage. Let’s face it, the pure unadulterated joy experienced at having the day off work is pretty inimitable too…

Last but not least, if you want to experience St Paddy’s at night, and get a glimpse of Dublin dressed in green light as you roam from bar to bar… don’t forget to join our exclusive St Patrick’s Day Party. 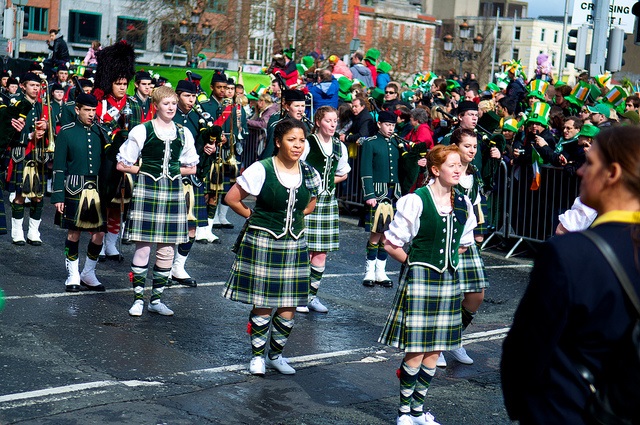 How to Survive a Night Out in Dublin

Dublin is renowned for many things, calm quiet nights in, are not one ...

There's something for everyone at London's markets; from flowers to fo ...

Back to our blog
Nightlife Travel Tips

How to Survive a Night Out in Dublin

Dublin is renowned for many things, calm quiet nights in, are not one of them. If you are heading to ...

7 Best Photo Spots for the Charles Bridge in Prague

If you haven’t seen the Charles Bridge, it’s as if you’ve never even been to Prague. Everybody ...

Hamburg on a Budget: The 5 Best Free Things to Do

We live in the dawn of cheap travel. Thanks to budget airlines, return flights across Europe can cos ...

Where to go in the red-roofed, fairytale-spired city of Prague? Who better to ask than a local who m ...

Oktoberfest for First-Timers: 10 Things You'll Wish Someone Had Told You

Oktoberfest is almost upon us again! While some travel blogs might share images of drunken, leery m ...