It’s that time of year again! A stocking full of our favorite cities are getting into the festive spirit, so if you’re thinking of doing something a bit different this year, leave the charades at home and venture elsewhere to see how our European neighbors do Christmas! Here’s our pick of the top 5 festive destinations in our network where you can enjoy an unforgettable adventure this Christmas!

There’s nowhere quite so bright and colorful as London at Christmas time: crowds from all over flock to the capital to see the lights being turned on and the decorations unveiled: the most popular of these ‘switch-on’ events is in Oxford Street, but you won’t want to miss the ones in Carnaby Street, Regent Street or Covent Garden, either! Speaking of Covent Garden, the decorations in this iconic square draw huge numbers, with this year’s special festive theme being ‘Meet me under the mistletoe’. The Christmas market here is also buzzing, and it’s the perfect place to enjoy a typically British yuletide treat: a mince pie with a warm glass of mulled wine. Once you’ve had a taste of what Christmas in the UK has to offer, why not explore the rest of London on one of the tours we promote – conveniently enough, they set off right here in Covent Garden!

Not far away from here is the unmissable Winter Wonderland. Located in the capital’s beautiful Hyde Park, this massive Christmas market has something for everyone, with tonnes of rides, attractions, and even an ice-skating rink! If you’re more traditionally-inclined, you’ll want to make your way to Trafalgar Square to enjoy the free Christmas carol performances that take place throughout December in front of the square’s massive tree (4pm till 8pm on weekdays, and 2pm till 6pm on weekends). 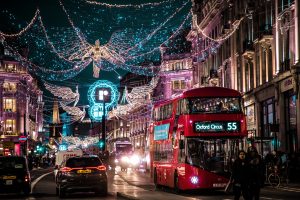 Christmas in Bavaria’s capital really is something else. Marienplatz is the beating heart of all the festive fun in Munich, with the Christkindlmarkt – the largest and most historic of the city’s markets – taking place here. Not only will you come across delightful craft stands to purchase handmade goods, but you’ll also be overwhelmed by a variety of delicious Christmas treats (don’t worry, you’ll still be able to find traditional Bavarian sausage as well). Don’t pass up the chance to try warm Glühwein (red is traditional, but white is very good too). And if wine isn’t your thing, you’re more than welcome to join us on our beer-tasting tour (that one runs all year round, and there aren’t many better places than Munich for a pint!).

Alternatively, if you’re looking to escape the cold, hop on the ChristkindlTram – a quirky Christmas-themed tram which whisks you to the gorgeous old town in just 45 merry minutes. And as if that isn’t enough, once you hop off you’ll be greeted by the festive sounds of carolling, and the irresistible aromas of gingerbread, cinnamon and Glühwein. The tram leaves every day from 3pm till 7.30pm from Sendlinger Tor. If you have a few more days to spend, don’t miss the opportunity to take the train across the Austrian border to Salzburg: a city that really knows how to serve up festive cheer!

Paris is enchanting all year round, but there’s something extra special about a Parisian Christmas! There’s no experience quite like wandering through the capital at this time of year, and the City of Lights shines even brighter thanks to a seemingly endless network of neon lights and festive decorations hanging high above the city’s streets and adorning its beloved landmarks. It’s perfect, then, that SANDEMANs-promoted tours of Paris wind their way through these streets 365 days a year! Not to be missed is the City of Lights Tour: this evening excursion is perfect for enjoying the Christmas lights in their fullest colour.

Of course, there are ice rinks and Christmas markets aplenty – the most famous of these being at the Champs Élysées and Trocadero. But did you know that many of the city’s iconic shops and department stores, such as Galleries Lafayette, deck their halls and adorn their window displays with incredible decorations, too? You’ll have to have a look in! Outside, children and adults alike will love the traditional carousels dotted around the capital. These happen to be very photogenic, though we can’t deny that if you’re looking to keep the kids entertained – and if your budget allows it –  the festive parades at Disneyland Paris can’t be beaten. Lastly, make sure to make a stop at Notre Dame, which shows off an incredible nativity scene, as well as boasting some of the most beautiful illuminations the city has to offer. 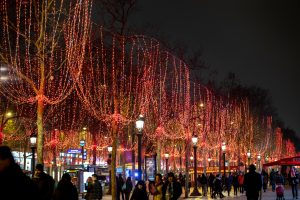 Though it may be one of our colder destinations, the welcome in Copenhagen is very warm this time of year. The city which gave us Hans Christian Andersen takes on an appropriately fairytale atmosphere, looking as pretty as a scene on a Christmas card. The markets at Nyhavn, Nytorv (the most central) and, of course, Christiania are unmissable, and you’ll want to leave the resolutions for the new year when trying some of the local festive delicacies. Aebleskiver (light jam-filled pancake balls), gingerbread, cinnamon rolls, donuts, peppernuts… all of which pair delightfully with a glass of glögg – Denmark’s take on warm mulled wine. Though if you want something a bit more substantial, we highly recommend you try our Copenhagen Food Tour!

Another real treat is a visit to the Tivoli Gardens – though usually closed in the wintertime, this theme park opens up around Christmastime for all to enjoy. With its gorgeous illuminations, charming wooden houses and snow-dusted trees, this is a wonderful way to experience Christmas as the Scandinavians do (and of course, Santa Claus and his reindeer will be there to spread the Christmas cheer!) If you’re also lucky enough to be around on December 13th, you won’t want to miss the amazing Saint Lucia’s day festival, where (from one of the city’s many piers) you can watch a fleet of kayaks bedecked in colorful christmas lights float the canals. You can even join some of the more vocal ones, who sing carols at Nyhavn, Christianshavn and Højbro Plads. 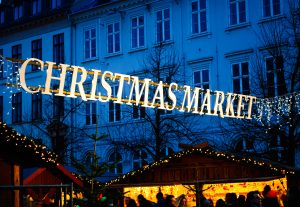 This might come as a surprise, but one of this year’s best Christmas destinations is a bit further south than you might expect! This year, Lisbon will transform itself like never before, playing host to the largest Christmas theme park in Europe! Capital do Natal will open its doors on the promenade at Algés from November 29th until January 12th, and will whisk visitors to a Lapland-like winter wonderland (without having to venture as far as Finland). Capital do Natal will boast 70,000m2 playground of Christmas markets, rides, leisure spaces, ice rinks, and even an ice sculpture exhibit… decorated in its entirety with lights and adornments galore (yes, that includes real snow and ice!).

But don’t think that there’s nothing festive to be found outside of these four walls: the Portuguese don’t joke around when it comes to Christmas! The whole city turns on its lights, and you’ll find that the streets are awash with festive figures and motifs. The traditional centrepiece of all of this is the massive Christmas tree at Praça do Comércio (which has, in the past, enjoyed the title of Europe’s largest Christmas tree). Whilst you’re there, you’ll also want to take advantage of its proximity to one of Lisbon’s most iconic neighbourhoods, Alfama, by joining our Alfama Tour. Don’t pass up a chance to visit the markets at Plaza do Rossio (a.k.a Plaza Don Pedro V) and at Parque Eduardo VII, where you’ll fall for the festive aroma of roasted chestnuts, and where you can snap up some local delicacies/last-minute gifts at a number of gorgeous craft stalls. The more adventurous among us might find the most breathtaking ice skating experience ever at Terreiro do Paço, on a rink overlooking the vast Atlantic ocean.

Yes, we know our geography, but New York, New York is one of our favorite SANDEMANs cities, and it would feel wrong to leave them out of a post about Christmas! Plus, with the incredible Strasbourg-Alsace Christmas Market right next to our FREE Tour meeting point, you’ll feel like you’re in Europe anyway! With everything from the tartes flambées to the charming wooden huts themselves being imported from France, there’s nothing inauthentic about this Noël experience!

But for those looking for the New York Christmas experience as seen on the big screen, the giant Norway Spruce at the Rockefeller Center – featured in Home Alone 2 and Elf – should be your first port of call. You’ll want to arrive early for the magical illumination ceremony on December 4th at 8pm! If you have the budget for it, you can even skate on the iconic ice rink here – though for a more economical option, you might want to head to Central Park. Boasting incredibly Instagrammable nature scenes, the city’s largest green (or snow-white!) space also offers traditional puppet shows at Swedish Cottage marionette theater, ice-skating at Wollman Rink, and you can even join the locals in sledding down Pilgrim Hill and Cedar Hill!

A trip to the Big Apple wouldn’t be complete without some retail therapy either, and the spirit is set by some of the amazing displays within New York’s famous department stores (look out for Saks Fifth Avenue, Bloomingdale’s, Barney’s and others!). But if you’re travelling with little ones, you’ll no doubt want to take a trip to FAO Schwarz, which is as nostalgic a Christmas experience as you could imagine – right down to the giant teddy bears and nutcracker dolls… even the biggest grinch will get into the Christmas spirit here! 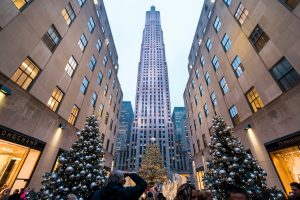 Things to do in London

Things to do in Paris

Things to do in Lisbon

Back to our blog
General Tours & Activities Travel Tips

8 Ways To Plan Oktoberfest Without Breaking The Bank!

Our Cities As Emojis

Here at SANDEMANs NEW Europe, we run a mind-boggling number of walking tours in 20 cities across Eur ...