Olé! We recently celebrated Seville’s first SANDEMAN-niversary, and we’re looking forward to many more years showing off this spectacular, sun-kissed Spanish city to our guests. From tasty tapas to fiery flamencao, there’s arguably no more typically Spanish city than Seville. So let us inspire you with 10 things that we love about the Andalusian capital!

Think of a Spanish dish. You probably thought of a tapa: a little plate of heaven! Of course you can find all the classics here – patatas bravas, jamón-filled croquetas and salty chicharrones (pork rinds). But did you know that there are some tapas that you might only find in Andalusia? The king is the montadito de pringá, a seriously hearty sandwich stacked with shredded meats (pork, chicken, blood sausage and chorizo). Espinacas con garbanzos is the star of vegetarian plates, a moreish moorish mix of cumin-spiced spinach and chickpeas. Not forgetting salmorejo, the Sevillian take on classic gazpacho (cold tomato soup), which is beyond refreshing on a scorching summer afternoon! 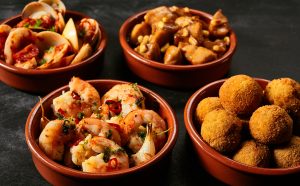 In a city famed for its scorching days and warm nights, it’s only right that Sevillians should have all the best refreshers. Every tapa must be served with a caña (a thin glass of beer, usually the local Cruzcampo), but you can always opt for the classic rebujito (a crisp mix of sherry and lemonade). Swap the sherry for red wine and you get Seville’s answer to sangria, known as tinto de verano. On the other hand, if you’re looking more to indulge than to refresh, then there’s a mind-boggling array of luscious sherries (wines from nearby Jeréz de la Frontera), such as amontillado, manzanilla or a sweet moscatel. 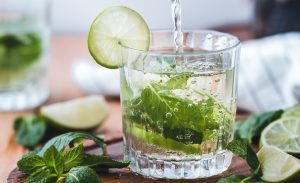 For a relatively small city, Seville boasts many characterful districts, from the narrow streets of trendy Santa Cruz, to the open boulevards of upscale Nervión. But no barrio is quite as iconic as Triana. Traditionally the home of Seville’s gitano (gypsy/Roma) population, Triana is a colourful neighbourhood with a very independent spirit – you’ll feel it as soon as you cross the river Guadalquivir! From intimate Flamenco venues, historic potteries and bustling clubs on the river-facing Calle Betis, it’s a vibe you have to experience to believe. Join us to see the best of it on our dedicated Triana Walking Tour! 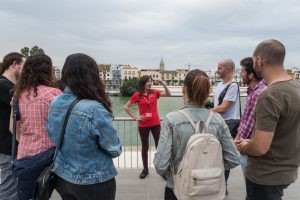 4. Andalusia on its doorstep

Seville is the crown jewel of a truly magnificent region of Spain: Andalusia. It’s well-connected by train from Santa Justa to some stunning sights, such as the Alhambra (Islamic Palace) at Granada, the iconic arches of the Mezquita (Mosque-turned-Cathedral) in Córdoba and the ancient port city of Cádiz. That said, some nearer sights are actually harder to reach, but they are well worth the trip by road: we recommend the jaw-dropping gorge that splits the town of Ronda in two, and the whitewashed cave and cliff houses of Setenil village. Hey, it’s better to have too much to see than not enough!

The Alhambra in Granada

If you’re in search of sun, bear in mind that some of our Northern and Central European destinations need a little… encouragement to warm up. There are no such problems in Seville, however, which has a summer period that arguably extends from April through till early October, and enjoys many hours of sunshine outside of these months, too. As such, life is geared around making the most of the good weather, with terrace dining, walks around the gorgeous Parque María Luisa, and consuming a mind-boggling amount of helado (ice cream) high up on our list of things to do under the sun.

Do be warned that temperatures regularly reach the high 30s to mid 40s in June/July/August, so be prepared for scorching heat in these months! 🔥

With such brilliant weather, delicious food and a proud history, Seville has a lot to celebrate – and it certainly knows how to! The Semana Santa (Holy Week) is the city’s foremost religious celebration, where the city’s many cofradías (church brotherhoods) run lavish processions through the whole city, descending upon the magnificent Cathedral in the centre. A fortnight later, the Feria de Abril, opens up over 1,000 festive casetas (huts) where locals dance sevillanas, drink rebujito and eat tapas all day and night. You’ll want to prepare well in advance, but you can’t visit Seville without experiencing it either…

… though if you do happen to miss one of these two major fiestas, you’re never far from a good knees-up any night of the week! The sexiest locations for Seville’s glitterati are on either bank of the Guadalquivir river – Paseo de Cristóbal Colón and Calle Betis (Triana) host a number of trendy bars by the shimmering waters. Though for a more ‘authentic’ experience (featuring botellón drinks and late night salchipapa and kebab), the maze-like Alfalfa district turns into a buzzing, highly student-friendly destination at night. Whatever your preference, Seville is easy on the wallet, so there’s no post night-out blues when you check your bank balance the morning after. 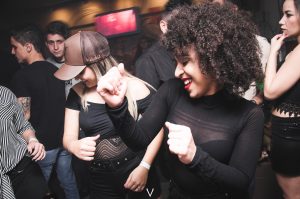 In spite of the heat, there’s no shortage of sport to enjoy in Seville, from rowing on the Guadalquivir to the curious tennis/racketball hybrid known as pádel. But one sport is king here: Football. Both of the city’s teams, Sevilla FC and Real Betis play in La Liga (the top division), and so regularly welcome Spain’s biggest teams, Real Madrid and Barcelona. But the only victory that matters is in the derbi, where masses of fans invade either half of the city with plenty of cañas, firecrackers and chanting all night long. Even if you avoid football like the plague, the atmosphere on derby nights is electric. 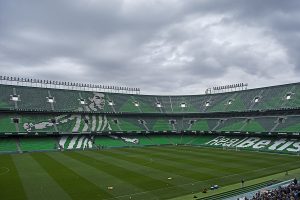 Seville is a paradise for history buffs, with an absolutely mind-boggling array of monuments, palaces and ruins. Evidence of ancient Roman settlement of Hispalis can be found at nearby Itálica, whilst the hallmarks of Muslim rule in the Giralda and the Torre del Oro remain iconic skyline features. Of course, Spain’s imperial successes are reflected in stunning buildings such as the Cathedral, the Archivo de Indias, the Maestranza bullring and the opulent Royal Tobacco Factory. And even into the 20th century, the palatial Hotel Alfonso XIII and unmissable Plaza de España prove that Seville wasn’t quite ready to leave the Golden Age behind so soon. All of this, of course, you can explore with us for free! 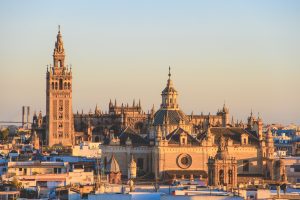 Sevilla tiene un color especial is the city’s unofficial anthem, but what exactly is this ‘special colour’? Well, we’d hazard a guess at 0range. After all, from the blazing sun overhead to the 40,000-ish orange trees lining many of the city’s principal thoroughfares, the city has a distinctly tangerine hue that belies the city’s warmth and vibrant colour…

If you feel inspired to join us in Seville, we can’t wait to welcome you! But, for goodness sake, don’t eat the oranges unless they’re already in marmalade. They’re bitter, you will regret it, and we will laugh at you – for fun! 🍊 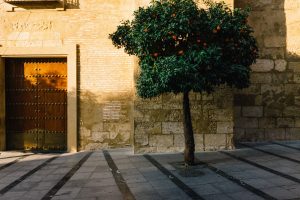 An Insiders’ Must-See Map of Barcelona

Forget dusty books written by people who've only been to Barcelona for ...

We're launching in Porto this March, and the whole SANDEMANs NEW Eur ...

Back to our blog
City Guides Travel Tips

10 Ways to Leave a Destination Better Than You Found It

Here are SANDEMANs, we are firm believers in the power of responsible travel, so we’ve put togethe ...

5 Cool Ways to Beat the Heat While Travelling!

Another year, another heatwave. It’s hard to beat the heat in the office (unless you’re fortunat ...